Hey you, pit bull breeder. Yeah, you, the jerk who thinks it’s cool to make money off the backs of poor, innocent dogs. You’re the kind of person who thinks nothing of letting your dogs produce litter after litter so you can sell their pups on Craig’s List or to anyone with cash-in-hand. You don’t care if your “breeding stock” has temperament issues, genetic defects or health problems. You don’t know anything about their bloodlines and you’ve probably never even taken them to the vet. Maybe they’re just existing out in your backyard, probably on chains, where they’re just lucky enough to get a bowl of cheap food, a little water and a pat on the head once in a while. Or maybe you’re just an irresponsible idiot who didn’t fix your dog and now she’s pregnant – again. And the puppies? You don’t care where they go, who they go to or what happens to them – their wellbeing is not your problem. If you can’t sell them then you’ll just dump them at your local shelter. Sure, let those nice people deal with your mess – that’s their job, right? So what if these unfortunate facilities are already packed to the gills with hoards of homeless pit bulls just like yours? But that thought never occurs to you and even if it does, you don’t give a damn. Meanwhile, legions of animals suffer and die because of you, another ignorant, selfish jerk who shouldn’t be allowed to even own a dog.

If I sound angry it’s because I just came away from a very upsetting visit to one of our local shelters here in Atlanta. Mind you, Fulton County Animal Services is an amazing facility, managed by the incredible LifeLine Animal Project and thus, run by a great group of kind, knowledgeable and dedicated, animal-loving individuals trying their very best to manage the burden our irresponsible pet-owning public has thrown at them. It was just a few days after the 4th of the July weekend, so understandably the shelter was extremely crowded. In fact, it was jam-packed, with triple the number of dogs the facility was designed to house. So while I knew I had arrived at a pretty a-typical, stressful time, it was an important scene for me to witness. Sometimes you have to experience something for yourself before you can truly grasp the reality of a situation.

I have long been aware of our nation’s homeless pit bull crisis. I know that pits and pit mixes are the most euthanized dogs in the U.S., with shelters destroying approximately 1 million of them every year (that’s almost 2,800 per day!). Still, I wasn’t prepared for what I witnessed firsthand at the shelter. We’re talking cages and dog runs practically overflowing with canines of all shapes and sizes, more than half of them pits or pit bull-types. It wasn’t unusual to have three, four or even five of them in one run. But here is where I have to give the Fulton County staff so much credit – for the amount of dogs and cats they were housing that day (465, to be exact), the place was incredibly clean and the animals were well cared for. Yet that didn’t take away from the upsetting scene before me.

I walked over to the first dog run and slowly crouched down. Four young pitties swarmed toward me, eagerly jumping up, whining, pawing and licking at my hand, which I had pressed against the chain link so they could smell me. Unlike some people, I’m not intimidated by bully breeds and am pretty adept at reading canine body language, so I didn’t hesitate to get down to their level while making sure to avoid initial eye contact. But this little group of friendly, tail wagging butt-wigglers was far from threatening – they were practically climbing all over each other to get as close to me as possible. As I took in all of their sweet, innocent, wide-jawed faces, feeling their warm breath and plaintive little licks wetting the back of my hand, I felt myself become overwhelmed with emotion.

I got up and walked away, trying to control myself. These unfortunate dogs didn’t need my sad energy – they were upset enough. One of my fellow volunteers from Angels Among Us Pet Rescue caught my gaze and my eyes welled up with tears. She understood. As someone who pulls dogs from Atlanta Metro area shelters on a regular basis, she’s been through this hundreds of times. I pulled myself together, taking deep breaths and steeling my heart before moving on to the next group of dogs, then the next, giving attention to anyone who wanted it along the way. I can’t recall passing a dog run without at least one or several pit bull-types in it.

I don’t think many people, especially those who breed them intentionally or unintentionally, fully grasp just how desperate the situation is for pit bulls in America. Feared and misunderstood by the general public (thanks in part to their vilification by the media), they have become the unfortunate victims of a particular subculture that not only views them as a status symbol but also enjoys using them for financial gain via breeding and dog fighting. As a result, this “breed” (the “pit bull” is actually a bully breed-type classification, not an actual breed) often ends up in the hands of abusive and irresponsible individuals. Add in targeted kill policies at shelters, breed specific legislation and breed bans, and you have a dog with more riding against it than any other type of canine. To put it simply, they are the most abused, misused and euthanized type of dog in our nation today.

Unlike Fulton County, many animal shelters have a no-adopt policy for pit bulls, so they’re either saved by rescue groups or killed, just for being pit bulls. Even sweet, tiny puppies don’t escape the euthanasia needle. So in the face of such a bleak reality, how can anyone justify breeding pit bulls right now? Not until the amount of good homes catch up with the amount of homeless dogs! Yes, there is definitely a place for ethical, responsible hobby breeders – I am not so militant about adoption and rescue that I’m against all breeders – but there is no place for backyard breeders, especially those churning out pits. Anyone who cares about dogs should be saving their lives, not adding more of them to our already saturated society.

Frustrated and needing expert advice, I consulted Lara Hudson, director of Fulton County Animal Services. As someone on the front lines of this challenging situation, I figured she would have a better understanding of what needs to be done to fix the homeless pit bull problem.

“Pit bull terriers are very popular, so this ‘breed’ is at the top of the list for many statistics because of their popularity,” she explained. “Combine this with the fact that any mixed breed, pit-looking dog is called a ‘pit bull terrier’ and then consider that if you breed mixed breed dogs and breed them again, they start to look like a generic pit mix, and thus, it looks like we have a pit bull problem. I disagree. Honda Accords are the most popular car in America. They are also the most stolen and they probably get the most tickets. Same with pit bull terriers. They are the majority ‘breed’ in our shelter and they are the majority ‘breed’ in households in this area. They are the breed most often filed on bite reports, etc. So I think the better question would be what are we going to do to alleviate the homeless pet problem in our city? For example, LifeLine just launched the ‘I’m In’ campaign on July 1 in an effort to make Atlanta Metro ‘No-Kill’ by the end of 2016.”

You could tell this girl had been through the ringer. Note the battle scars on her head.

While all this made sense, it definitely wasn’t the answer I was expecting. But I could definitely appreciate Lara’s broader perspective on the issue. After all, she has a pretty clear understanding of the community she serves and the issues it faces.

“To put it simply, it’s a problem with education,” she explained. “When you drive through some of the areas in our community and you see where a lot of these stray dogs come from, you realize that these people’s kids aren’t even being taken care of. A lot of people really do love their dogs but their parents, grandparents, and their grandparents’ parents all tethered their dogs outside. It’s going to take generational change and improving the conditions where these animals are coming from so it trickles down.”

She continued, “We need more resources, ways to help people who don’t have enough money to take their animals to the vet, because what happens when people can’t do that? Their animals get sick, they turn them into the shelter or they let them go. So I think casting a bigger net by providing better resources for people who want the help is going to save more animals than aggressively going after the minority of people not doing the right thing, regardless of their resources.”

I understand that change takes time and that there’s no magic bullet to solve this problem. Still, it’s terribly frustrating and upsetting, thinking about all those homeless dogs – pit bulls or otherwise – dying in our nation’s shelters every day. But I guess when it comes to changing irresponsible human behavior there are no quick solutions. Mandatory spay and neuter legislation has been proven to be ineffective and enforcing breeder licensing fees is extremely difficult. Continuing to educate the public about responsible dog ownership, including the benefits of spaying and neutering their pets, and offering those services for free or at very low-cost is one tried-and-true solution, but it’s a process and a gradual one at that. Educating the public about bully breeds to help clear up fears or misconceptions about them is another way to increase their adoption numbers. But no matter how hard we try, we’re simply not going to rescue our way out of this problem. It’s a very frustrating conundrum with no simple or expedient solutions.

Two sorrowful kennel mates. I wished I could save them all.

Meanwhile, people who want to their breed dogs, especially pit bulls, should have to spend time volunteering at their local animal shelters so they can witness the tragedy of pet homelessness firsthand. They should have to spend time in the kennels, see the faces and watch as one wonderful dog after one wonderful dog disappears into the euthanasia room (or better yet, watch them take their last breaths). Maybe that will help change their tune. Maybe then they’ll fully grasp that the most responsible, compassionate choice is to not contribute to the problem by spaying and neutering their pets.

Pit bulls and pit bull-type dogs are some of the most wonderful, loving and loyal companions anyone could wish for, but they’re definitely not the right fit for everyone. It takes a special kind of person to become a successful pittie parent, so please do your research before bringing one into your life.

For more information about pit bulls, their history and their plight, check out this article published in Pacific Standard magazine as well as this wonderful piece featured in Esquire, both published last year. And while you’re at it, visit Pit Bull Rescue Central for tons of great educational and adoption information resources!

“He who is cruel to animals becomes hard also in his dealings with men. We can judge the heart of a man by his treatment of animals.” – Immanuel Kant 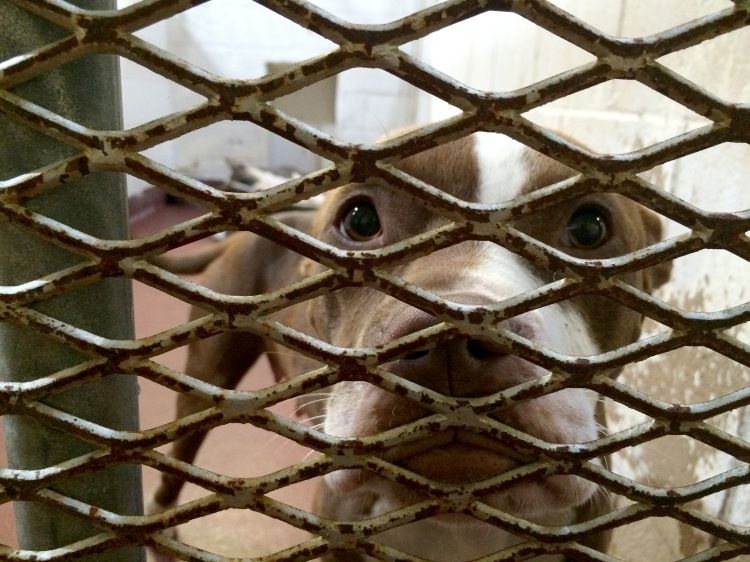