Burying my face in his thick, furry neck, I felt my dog take his very last breath. Hugo, my beautiful 14-year-old German shepherd, was gone. Lying with him in his bed, spooning his now motionless body, I sobbed with an intensity that shook me to the very core of my being. I realized I was crying harder than I had in years, my grief so deep and intense, it felt as if a part of me had been clawed out and torn away.

Hugo was the first dog I’d raised from cradle to grave. I had had other dogs before him but what I felt for Hugo was different. He was born the night my father died, so I liked to imagine that he’d been sent from a spiritual realm to serve as my protector and guardian, to be my “angel puppy.” But if anything, this special being in canine form came into my life to become one of my greatest teachers. A demanding puppy to raise, he was fear aggressive from an early age and became overly protective of me to a fault. I know I made a ton of mistakes with him. Yet in facing the challenges he presented I had no choice but to become a more patient, compassionate and understanding person, to work with his issues while accepting him for who he was – a wonderful but sometimes difficult dog.

But despite his shortcomings that often tested my patience to its limit, Hugo was my baby boy and I was his mom, committed to him for life. Through our years together he saw me through some very difficult and tumultuous times. He was a constant, steady and unconditionally loving presence in my life, always there to lick away my tears and make me laugh with his silly personality. I adored him and kept him out of trouble and in return, he gave me his undying loyalty and devotion. I was his person, and as time passed our special connection only solidified. We understood and accepted each other, flaws and all.

But now here I was, holding Hugo’s old, crippled body as it began to grow cold in my arms. I showered his grizzled head with tears and kisses, remembering when only 14 years ago I had taken that fuzzy little sable puppy in my arms for the first time, held him out in front of me and declared “he’s perfect!” Because he was. 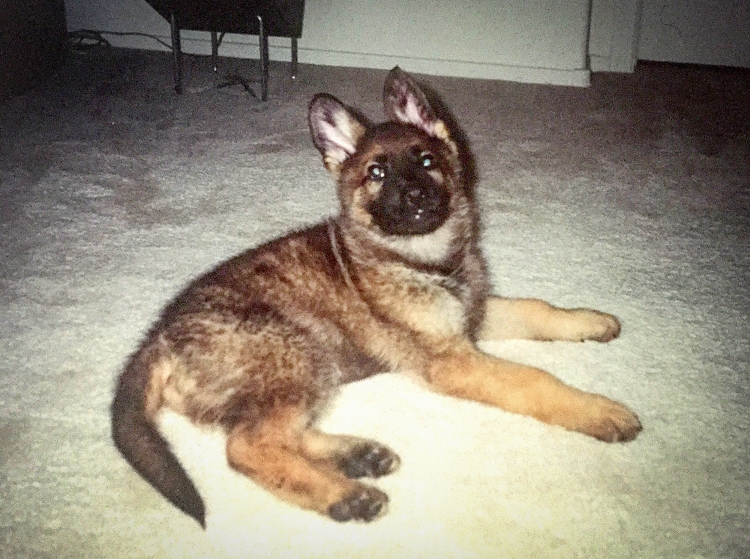 Baby Hugo at 9 weeks. Who would suspect that this adorable little bundle of joy was really a naughty little brat in disguise?

As the vet took his leave and we waited for the pet crematory funeral director to arrive, it dawned on me that the depth of my sadness far surpassed anything I had felt when a human friend had died. In fact, I had just lost a close girlfriend the month before to cancer, and even though I had loved her dearly I certainly hadn’t felt this level of grief. Was there something wrong with me, or was I experiencing something akin to what one might feel when losing a child?

Bewildered and curious about this phenomenon, I later consulted with my friend Betty Carmack, author of “Grieving the Death Of a Pet” and pet loss support group counselor at the San Francisco SPCA, a volunteer position she had recently retired from after 32 years.

No, I wasn’t weird, she reassured me. In fact, my feelings were far from uncommon.

“That was a theme I heard consistently in my group, that people were grieving more for their pet than they ever did for their parents, sibling or friend, that the grief they felt for their animal was like no other grief,” Betty said. “That’s because of the relationship we have with our animals – it’s unconditional love, it’s deep and it doesn’t carry all the baggage that human relationships carry. Then there’s that loving, that mothering, that caregiving that people do for their animals. I heard people say all the time: she was like my baby, she was like my child.” 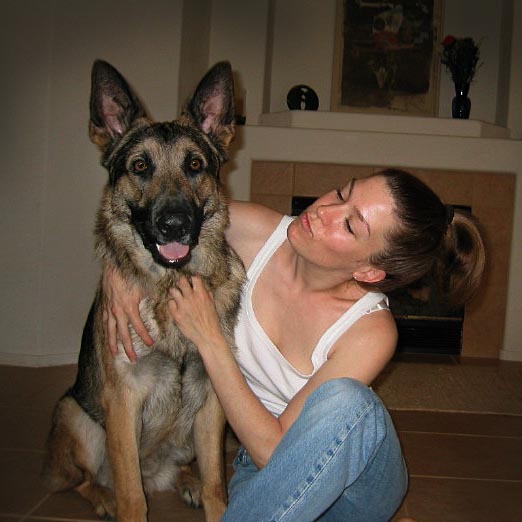 A strapping young Hugo and his adoring Mommy.

During the holiday season, I missed Hugo so terribly. I longed to be in his magnificent presence, to laugh at his silly antics, to feel those intense lion eyes watching my every move. Yes, I had my three other dogs to care for and adore, but the house wasn’t the same without my Hue. My husband, friends and family were so kind and understanding and I was surrounded by love, compassion and gestures of caring. Yet I ached.

To make matters worse, a little nagging thought began clouding my mind: had I really done everything I could for my boy, who had suffered from terrible, debilitating arthritis in his last year? I thought I had followed every medical, natural and pharmaceutical protocol known to man, but was there something else I could have done that might have made him more comfortable or better yet, extended his life?

Betty assured me that these moments of self-doubt and guilt are also very common for people, especially when their pets have died from illness or old age.

Hugo showing his silly side.

“Some people would come to the group questioning themselves and thinking that maybe they didn’t do enough or didn’t do as well for their animal as they could have,” Betty said. “But when they would tell their story about what they did do for their animal, people would say to them, ‘you did so much for him,’ or ‘he was so lucky to have you, that you loved him that much.’ To get that kind of feedback and support was so comforting and healing for people going through those kinds of difficult feelings.”

While I had enough support at home to help me through my grief, I could see the incredible value in joining a group like Betty’s to work through the rollercoaster of emotions I was experiencing. I felt so grateful I had people in my life who understood and could relate to my pain, imagining how terrible it would be if instead of sympathetic eyes and warm hugs I had been met with blank stares or even worse, comments like, “well, can’t you just go get another dog?” What would I have done then?

Betty reminded me that while Western society has definitely come a long way when it comes to acknowledging the significance of losing a pet, there are still those who don’t understand how deep and intense that pain can be and as a result, may trivialize those feelings.

“That can be part of the sadness, when someone negates a relationship that was so vitally important to you,” she said. “I would always tell people to only put their grief out where they know it’s going to be respected and treated tenderly because it’s too private and too personal to let it get trampled on. I would then encourage them to find that one person, that one friend with whom they could share their feelings, someone who would respect and honor their grief.” 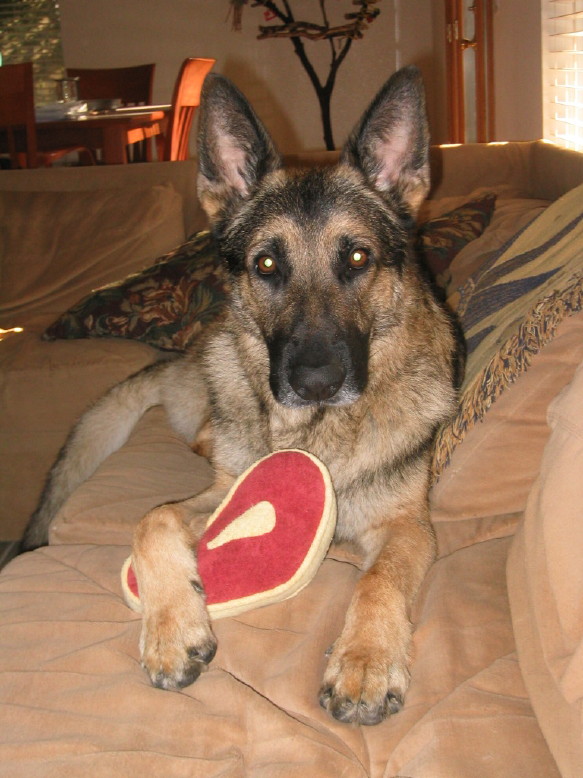 Huey on his 4th birthday, protecting his new toy from the rest of the pack.

Here are some other helpful suggestions Betty shared with me for coping with the loss of a beloved companion:

Almost nine months later, I am still hurting over the loss of my Hugo but am finding ways to honor his memory and focus mostly on the good times we shared. Life without him hasn’t been easy, though. I still look for him in the house at times, thinking he’s right there next to me, eyeballing me for a treat, watching my every move, always at the ready to shower my face with kisses. His constant whining for my attention used to get on my nerves at times but now it’s like an old song I long to hear. And while I love my three fur kids beyond measure and know my life will always be filled with dogs, there will never be another like Baron Hugo Von Tollhaus, my angel puppy. To say he took a piece of my heart with him is an understatement. To me, he was a person in a dog suit, a special being who opened my heart as it has never been opened before. He was my teacher, my guardian, my child. Because of him, I am forever changed, and for the better.

Hugo at 13 with his still-adoring Mommy.

“It came to me that every time I lose a dog, they take a piece of my heart with them. And every new dog who comes into my life gifts me with a piece of their heart. If I live long enough, all the components of my heart will be dog, and I will become as generous and loving as they are.” – Unknown