If your Facebook news feed looks anything like mine, it’s probably flooded with tons of postings and photos of homeless animals, including the most heartbreaking – those of dogs whose time is running out at yet another high-kill animal shelter. Their sweet, confused, and frightened faces never fail to pierce holes in your heart. But if you’re like me in that you’re unable to foster, adopt, or donate more than a few dollars to rescue groups that save shelter pets, all these postings do is leave you feeling incredibly frustrated, depressed, and downright helpless. Because it seems that no matter how many lives are saved at a given facility one week, another wave of unwanted animals is sure to follow the next. Meanwhile, every moment you’re sitting there, trying not to cry, you know that those desperate dogs will likely be among the estimated 9,000 pets that die in U.S. shelters every day. It’s enough to make any animal lover want to go offline and stay there.

According to the No Kill Advocacy Center, shelter killing is the leading cause of death for healthy dogs and cats in the U.S., with “almost half of all animals who enter our nation’s shelters going out the back door in garbage bags rather than out the front door in the loving arms of adopters, despite the fact that there are plenty of homes available.” If you take into account that only 37% of all dogs and 46% of all cats living in homes today were adopted from shelters, that means that the lion’s share of homeless pets are not making it out of our sheltering system alive.

It’s a soul-crushing reality, one we in rescue and animal advocacy constantly wrestle with (and often argue over) in our desperate search for expedient and lasting solutions. What’s it going to take to stop the killing of millions of savable dogs and cats in shelters? How do we stop the flood of unwanted animals by convincing more people to spay and neuter their pets, as well as choose adoption first? How do we stop unethical breeders and irresponsible pet owners from creating this mess in the first place? Is taking our sheltering system no-kill the answer, and is it even possible, or is no-kill just some lofty, unrealistic dream with its own fair share of unintended consequences?

The moment I decided to cover the no-kill movement I knew I’d bitten off a whale of a topic. It’s a highly controversial and contentious issue, long known for its polarized camps of passionate proponents and opponents. In fact, just say the words “no-kill” within earshot of any animal lover and you’re likely to spark a heated debate. Although I’ve always loved the idea behind the no-kill philosophy, after everything I’ve observed in the rescue community here in the southeast (where pet homelessness and irresponsible breeding are endemic), I figured euthanizing pets for lack of good homes was a necessary evil we’d probably always have to live with. But after hours of research, several eye-opening interviews, and a fair amount of soul-searching later, I have come to the conclusion that no-kill is not only possible, but is also the most ethical direction for our animal-loving society to move. 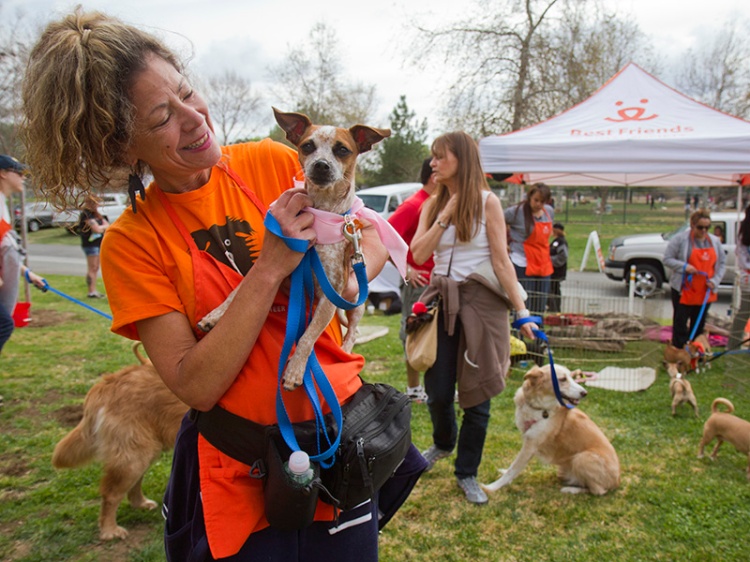 Best Friends Animal Society is one of my favorite animal welfare groups and a true leader in the no-kill movement. I’ve always loved their positive messaging, progressive philosophy, and intelligent approach to ending pet homelessness. In fact, they’re the only national animal welfare organization exclusively dedicated to stopping the endless killing of dogs and cats in our nation’s shelters. I couldn’t wait to talk with them, especially since I learned they’d be launching their fourth regional center in Atlanta next month (plus, I was wondering whether they fully understood how much work they would have cut out for them here!). But what started as a straightforward, fact-finding interview with Judah Battista, Best Friends co-founder and chief regional programs officer, turned into an incredibly enlightening and inspiring educational session about the true meaning of the no-kill mission.

“Best Friend’s overall organizational vision is a better world though kindness to animals, with our mission to bring about a time when there are no more homeless pets,” Battista explained. “En route to achieving that mission, one of our goals is to end the killing of dogs and cats in shelters. But first, it’s important that we distinguish between euthanasia and killing, and frankly, any pet owner who’s had to put an animal to sleep knows the difference. Euthanasia is an act of mercy for a physically or behaviorally irredeemable animal that can’t be humanely cared for, while distinctly separate from that is killing, or the ending of a life because we as a society don’t have better solutions yet. I would argue that we do have better solutions, we just don’t have enough community awareness (yet). (No-kill) doesn’t mean that no animal ever dies, but it does mean that we’re not killing dogs or cats who are healthy or treatable – in other words, savable.”

Unlike traditional animal shelters that follow the standard cage-and-kill operating model, no-kill shelters don’t use euthanasia as a primary means of population or disease control. They value each individual animal life and believe that every dog or cat deserves equal consideration. But before we dig further into the philosophy, how it works and what it takes to achieve it, it’s important to understand how our nation’s sheltering system evolved and got us to this point where most of us who love animals are no longer satisfied with the status quo.

Once upon a time, homeless dogs and cats were viewed as a public nuisance in America. Sections of many cities were overrun with wandering strays that not only posed a direct threat to people and horses, but were also feared to carry rabies. The solution was to catch and warehouse these animals in “pounds,” substandard facilities used in colonial agricultural communities to collect and hold stray livestock until their owners could reclaim them. But unlike cattle, pigs, or sheep, dogs and cats had little monetary value, so ending up at a pound basically meant death, typically through beating, drowning, or shooting.Traditional animal shelters evolved from these primitive facilities in the late 1800s in response to their barbaric approach to stray population control, with early humane efforts focused on finding “kinder” forms of euthanasia for homeless dogs and cats.

The U.S. humane movement officially kicked off in 1866 with the founding of the American Society for the Prevention of Cruelty to Animals (ASPCA), the country’s first animal welfare organization that initially focused primarily on the treatment and condition of horses. Founded in 1969, the Women’s SPCA of Pennsylvania (now the Women’s Humane Society) built the country’s first animal shelter, and became the first humane group to direct its energies toward the humane treatment of shelter animals.

Soon, more and more humane organizations were popping up across the country in major cities, and the concept of animal control and shelters slowly took hold. For the next several decades, community animal control services would be assumed by humane groups, with the emphasis on improving shelter conditions and developing more “humane” methods of euthanasia, such as electric shock, gas and decompression chambers, and finally, lethal injection. This endless cage-and-kill model would remain the status quo through the mid-1900s, with little thought given to saving lives or solving the increasing pet overpopulation crisis.

Fast forward to the 1970s, which proved to be a defining decade for decreasing euthanasia trends in animal shelters. Spay and neuter became an important part of shelter operations and pet adoption, with the ASPCA instituting a mandatory sterilization-before-adoption policy in 1972, one that would set a standard at most shelters across the country. The important role of early sterilization of young dogs and cats began to grow, and the numbers of companion animals entering shelters in some communities began to decline. Soon, an important conversation about saving animals rather than killing them began.

The no-kill movement officially started in San Francisco in 1989 under the leadership of Richard Avanzino at the San Francisco SPCA, who made the critical decision to relinquish the shelter’s contract for animal control and instead work with the city’s municipal animal control agency in an effort to end the killing of adoptable animals. This action had a far-reaching impact on the entire animal welfare movement, one that would challenge shelters and their communities to evaluate the need to kill savable animals. Many other animal sheltering agencies followed suit, leading to an often heated and ongoing philosophical debate about the use of euthanasia as a primary means of shelter population control. But despite the controversy and push-back from those who would resist change, the viability and appeal of the no-kill movement has gained traction and continues to build momentum, with hundreds of shelters across the nation striving to achieve 90% or greater save rates.

While our sheltering system has undergone many dramatic changes over the last century, especially within the last three decades, it remains a primarily antiquated system in dire need of reform. But thanks to the influence of the no-kill movement and growing public awareness of the plight of shelter animals, we are seeing a veritable revolution taking hold in communities throughout the country. More and more shelters, both public and private, are working harder than ever to go from dark, smelly, and depressing places that warehouse animals until they’re killed, to friendly and inviting community centers with comprehensive programming and pet care services to help decrease pet populations, increase adoptions, prevent pet homelessness, and most importantly, save lives.

“The reality is that we as a generation have inherited an animal welfare system that was implemented basically for rabies control, not a system that was intended to save animals’ lives,” said Battista. “But what is happening at shelters is what the community has subsidized – they are a reflection of the will of the community. We as a society have decided that there should be a service that gives people the ability to dump a pet…that that’s an acceptable decision for citizens to make. But our expectation as pet guardians has changed, and our consciousness as people has changed from when most of our ordinances and services were established, so now we’re in a position where we need to catch up.”

So how do we transform our shelters from places where unwanted animals go to die, to places where savable dogs and cats are guaranteed a home? Stay tuned for Part Two!

Adorable pooches wait for someone to save them from an over-crowded animal shelter. (Photo credit: petbucket.com)

To learn more about Best Friend’s policies and positions on no-kill and other related animal welfare topics, click here.

One thought on “Is No-Kill Really Possible? Part One”